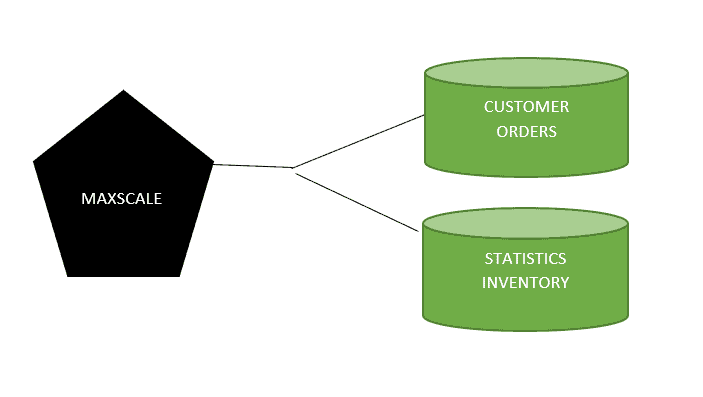 In this MariaDB tutorial, we will discuss the concept of MariaDB Sharding and look at several examples related to it. There are lists of the topic that comes under discussion:

In this section, we will discuss the concept of MariaDB Sharding and its detail.

Sharding is a MariaDB technique for dividing a single database server into many pieces. This post will teach you how to shard in the simplest of ways. Each schema is on its own database server, and the schemarouter module in MariaDB MaxScale is used to bring them all together on one database server.

The client will see MariaDB MaxScale is a database server that has all of the schemas from all of the configured servers. The diagram of MariaDB Sharding is given below:

In this section, we will learn about the types of sharding in detail in the MariaDB.

In this case, the data is split based on the value ranges that each object contains. If we save contact information for all online customers, you might choose to keep the information for customers whose last names begin with A-H on one shard and the rest on another.

The downside of this technique is that the customers’ last names may not be adequately disseminated. We may have more customers with names that fall between A and H than consumers with names that fall between I and Z. In this instance, the first shard will be subjected to a greater load than the second, and it may create a bottleneck in the system.

The advantage of this method is that it allows for simple sharding. Because we don’t need to aggregate numerous shards to answer any query, the application layer is easy.

In this circumstance, distinct aspects of an entity will be placed in different shards on different machines. A person might have a profile, a list of connections, and a list of articles he’s published in a LinkedIn-like software, for example. In a vertical sharding technique, we might place individual user profiles on one shard, connections on a second shard, and articles on a third shard.

The following are the MariaDB Vertical Sharding’s two biggest drawbacks:

In this case, an entity has a value (for example, a client program’s IP address) that may be sent through a hash function to generate a hash value. This hash value determines the database server(shard) to use.

Consider the following scenario: each request included an application id that was incremented by one whenever a new application was registered, and we had four database servers.

The biggest disadvantage of this sharding is that dynamically removing or adding a database can be time-consuming and costly.

In this section, we will know about MariaDB Sharding Table in detail.

Using table partitioning has more than one advantage. It is feasible to split a table across multiple servers and physical machines since the sub-tables can address a table on another server. This may be required to access data from multiple remote workstations, such as business branch servers, as a single table.

Alternatively, it can simply be used to partition a large table for performance reasons. We use the variant as RANGE COLUMN in the partition method. Let’s use the RANGE partitioning type of the Sharding table in the CREATE TABLE statement by the following query:

In the preceding query, we have created a table called EMPLOYEE_DETAIL with the primary key as ID and timestamp column. And then we have partition by the RANGE keyword on the TIMESTAMP column by 2017,2018,2019 and 2020.

We will learn about the SPIDER engine in sharding in this topic, which will be explained via an example.

The Spider storage engine is a cluster formation storage engine with security characteristics. It supports partitioning and treats tables from many MariaDB instances as if they were all from the same database.

When we create a table with the Spider storage engine, it links to a table on a distant server. For the remote table, any storage engine can be utilised. Establishing a connection between a local MariaDB server and a distant MariaDB server creates the table link. The connectivity between all tables in the same transaction is the same.

In the preceding query, we have created a table called spider_engine with using the engine= SPIDER and passing the value of the local host as 127.0.0.1, user as root, password as G@meison00, and port as 3306 in the SELECT statement.

In this sub-topic, we will know about MariaDB Maxscale Sharding in detail.

MariaDB MaxScale is a database adapter that boosts MariaDB Server’s availability, scalability, and security while also separating application development from the database architecture.

The max scale sharding feature in MariaDB is a powerful database proxy for MariaDB servers. It sits in between client applications and database servers, conveying client queries and responses. It also monitors the servers to see if any changes to their status or replication technologies are necessary.

In this topic, we will know about the MariaDB Galera Cluster Sharding in detail.

MariaDB Galera Cluster is a virtually synchronous MariaDB multi-primary cluster. It’s solely for Linux and only works with the InnoDB storage engine (but MyISAM storage engine support is experimental).

Also, take a look at some more MariaDB tutorials.

In this tutorial, we have discussed the concept of MariaDB Sharding and also look at some samples. There are lists of the topic that comes under discussion: