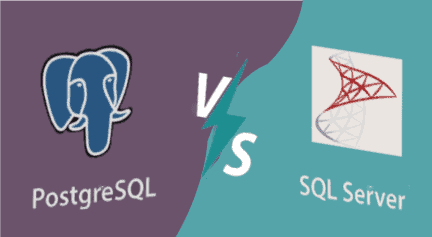 In this PostgreSQL tutorial, we will discuss, a detailed comparison between Postgresql and SQL Server (Postgresql vs SQL Server) and will cover the following topic:

PostgreSQL is a powerful, open-source, Object-relational database system. It provides good performance but needs fewer maintenance efforts as of its high stability.

It was the first Database Management System that implemented the multi-version concurrency control (MVCC) feature. It is known for supporting a lot of data types, intuitive storage of schemaless data.

SQL Server is a Relational Database Management System. It is platform-dependent and it supports both Command Line Interface (CLI) and Graphical User Interface (GUI).

It is a commercial solution and is preferred by most of the companies who are dealing with large traffic workloads on daily basis. It supports a wide variety of tools like reporting services, integration systems, transaction processing, business intelligence, and analytics in the IT environment.

PostgreSQL is an open-source RDBMS. There is no licensing cost for owning and upgrading it, except the operational costs that include the salaries of database administrators and developers. This operational cost is similar to that of any other major DBMS.

Also, there is no cost involved for its community-based support or its upgrades to newer versions. There may be hardware (data center) upgrades and data migration costs when you upgrade versions.

SQL Server does not provide a free upgrade to a newer version. Upgrade and migration to newer versions are at the customer’s cost. Operational costs (DBA, developer, and manager salaries) are similar to that of any other standard DBMS.

Note – There is a free version of SQL Server available for students and developers.

In the case of SQL Server, support costs depend on the terms and conditions of the licensing agreement. Upgrading to a newer version is at the customer’s own expense. Datacenter upgrades, data migration costs, and other operational costs are similar to that of any other major DBMS.

In this PostgreSQL tutorial, we have learned a detailed comparison of features, syntax, and applications of Postgresql and SQL Server and have covered the following topic: