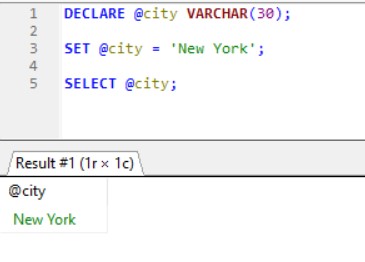 In this MariaDB tutorial, we will learn about the “MariaDB Variables” which is the type of variables, and how to set the variable. Additionally, cover the following topics.

First, we need to know 'What is variable?', a variable is used to store different kinds of values or information that can change over time. The data type defines the type of variable in our program, if a variable is defined as an integer data type, then the variable type is an integer and it will store the integer value only.

The syntax is given below ‘How to declare variables in MariaDB’.

Let’s define a variable with datatype using the below code.

The syntax is given below to define the new variable within the query.

So for demonstration, here we will use the two tables Employee_country and Person. The description of the table is shown in the below picture.

Let’s create a new variable name @country with a SELECT statement and assign the value.

Now, we will use the created variable @country that contains the value as United State of the column emp_country of the table employee_country to filter the person name, birth_date, and birth_place of the table Person.

In the above code, we are viewing the person whose birth_place is equal to a value within a variable @country.

From the output, we can see that only one person Kenneth S. Covington whose birth_place is the United State.

Let’s declare a new variable using the below code.

Now, set the value of a variable @city.

View the value of the above-created variable.

The output is the string ‘New York’, this is the value that we assigned to the variable @city.

Most of the time we use variables in the procedure to store the value of the calculation or operation within the procedure, a procedure is a stored program that acts as a function in other programming languages.

If you don’t know about how the procedure works, then refer to our tutorial “MariaDB create procedure – Complete Tutorial”.

Here in this section, we will create a procedure Counting_sum containing variable Count_num that stores the integer value for counting the numbers. Use the below code to see the demonstration of how the variable is used within the procedure.

Call the above procedure and store the result returned from the procedure into a variable name @counting_value.

Now view the value of a variable @counting_value using the SELECT statement.

From the output, we can see that the result is 10.

The syntax is given below how to use the SHOW VARIABLES.

Sometimes, if we want all the variables which have some common pattern, then we can view all these variables by using the wildcard character "%" with the LIKE clause to match the pattern. If you don’t know how to use the LIKE clause, then refer to our tutorial “MariaDB LIKE Operator”.

Let’s view all the variables that contain the word 'log' in their names.

The above code shows all the variables whose name contains the word ‘log’.

From the output, all the variable name contains the word ‘log’ in their names.

In MariaDB, there is no concept of variable in tables but we can declare a variable whose data type will be the data type of column that exists in another table. For that, we use the two keywords that are TYPE OF and ROW TYPE OF.

So, here we will use the same table 'Person' that we have used in the above sub-section ‘MariaDB variables in query‘.

Let’s take an example to know how to create a variable whose data type is defined from another table or column in a procedure.

Look at the above code at line DECLARE state_name TYPE OF person.birth_place;, here we haven’t declared the data type of variable directly by specifying VARCHAR instead, the data type is declared from column birth_place of table Person.

Call the above procedure and store the result returned from the procedure into a variable name @name_state.

Now view the value of a variable @name_state using the SELECT statement.

Open any text editor on your system, write the below line and save the file with name and extension (.sql) like variable.sql. The below line is the same code that we have used in the above sub-section.

Open the terminal or command-line and login into the MariaDB server.

Run the below code to execute the script file variable.sql that we have created.

Now we are going to know about how to show and set the system variables in MariaDB.

The above code shows all the variables in MariaDB.

In the above output, all are system variables.

we can also these system variables according to our needs using the statement called SET but this variable can change in three ways.

Using the SET statement, this statement is used to set the variable value at runtime and the value set while runtime doesn’t persist when we restart the server.

We can also set the environment variables as we have learned in the above sub-section ‘MariaDB system variable‘.

You may also like to read the following MariaDB tutorials.

So, in this tutorial, we have learned about the “MariaDB Variables” and covered the following topics.