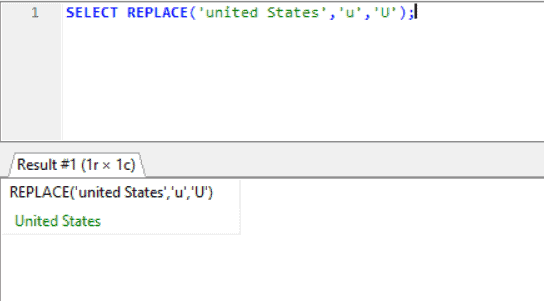 In this MariaDB tutorial, we will learn about the ‘MariaDB replace function‘ and cover the following topics.

For example, ‘United States‘ and ‘united States‘ are different words because the ‘U’ is in uppercase in the first word and lower in the second word.

Let’s check the with example.

Here in the above code, we are replacing the lowercase letter ‘u’ in the word ‘united States’ with the uppercase letter ‘U’ using the REPLACE function.

From the output, we can see that the REPLACE function has replaced the lowercase letter ‘u’ with the uppercase ‘U’.

In MariaDB, The REPLACE works the same as the INSERT statement except that if there is the old row in the table has the exact value as a new row for a PRIMARY KEY or a UNIQUE index, the new row is inserted after deleting the old row.

Create the new table as rt that will contain the name of animals and insert the data also as given below.

After creating the above code, let’s insert the new value using the REPLACE INTO statement.

From the above output, we can see that we have inserted the new value as Tiger in the rt table using the REPLACE INTO statement.

Read: How to Grant User Access to a MariaDB Database

The syntax of the REGEXP_REPLACE is given below.

Let’s understand with an example.

The above code will remove the digit from the source_str ‘hello456’, and pattern ‘[0-9]’ represents all the digits from 0 to 9.

Read: How to Create Database in MariaDB

The REPLACE FUNCTION can be used with an UPDATE statement to update the value of the columns in MariaDB.

Let’s see with the example.

Here in the above code, we are updating the column animal_name with replace function using the UPDATE statement. where t is the alias of table rt that we have created above sub-section, where the SET command is used to set the column values.

After the equal sign or assignment operator, the REPLACE FUNCTION is used to replace the column t.animal_name values and this contains t.animal_name as source_str, ‘Tiger’ as from_str, and ‘Elephant’ as to_str.

Read: How to create a user in MariaDB

The REPLACE FUNCTION can replace the string in the long text with another string, but it will not replace all the text until specified in the pattern.

Now run the below query to replace the string in the text.

In the above code, REPLACE function contains source_str as ‘Dog is running with another dog on the street’, from_str as ‘dog’, and to_str as ‘Dog’. Here the word dog which started with lowercase ‘d’ is replaced by the uppercase word ‘Dog’.

In MariaDB, the NULL value can be replaced by 0 using the UPDATE statement, the null value denotes to lack of value or does not point to any object.

Create a new table as null_demo, insert the records and view the table using the below query.

In the above output, there is column value_2 that contains the null value, so we will replace this null value with 0.

The MariaDB REPLACE FUNCTION can also replace the values, here we will consider the value as an integer.

Let’s check with an example.

In MariaDB, The REPLACE FUNCTION can also replace the characters in the string, the string is a sequence of characters.

Let’s replace the character from the string.

The above code will replace the lowercase ‘s’ in the string ‘United States’ with nothing, where ‘Unites States’ is a source_str, ‘s’ is from_str, and double single quote (”) is to_str.

As we can see in the above result, character ‘s’ is replaced with nothing or a double single quote that represents nothing in the string United States.

Let’s understand with an example.

In the above code, we are replacing the special character @ with space using the replace function. where @hell is source_str, ‘@’ is from_str, and ‘ ‘ is a space as to_str.

You may also like to read the following MariaDB articles:

Here we learned, how to use replace function in MariaDB and also covered the following topics.